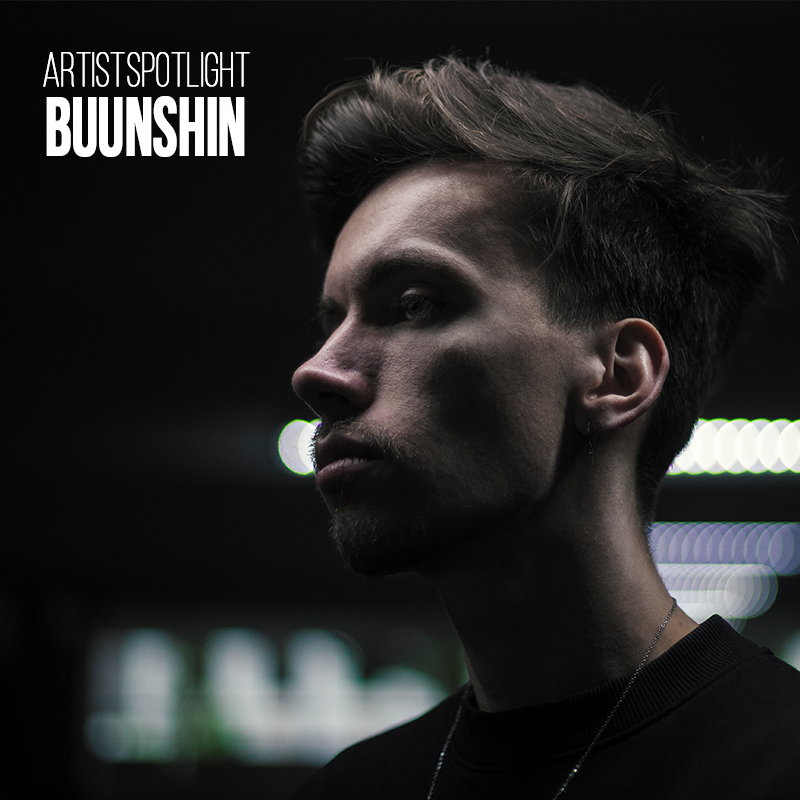 Buunshin: maybe some of you may have heard about this super talented newcomer, who has already released on DIVIDID and Neosignal. With a really technical and refined sound, he has caught a lot of people’s and producers’ attention. He gave Studio Drum and Bass a few words about his current projects.

First of all, where does the name “Buunshin” come from ? As some of our readers may have guessed, it is derived from the Japanese word “bunshin” and means something along the lines of “body”, “embodiment” or “alias”. He decided to add a letter to the word for a better search engine optimisation, which is quite important in the Internet era. “I was very much into the idea of form follows function back when I chose it”, he told us. In fact, that may be accurate to do as a producer nowadays, since communication mainly relies on social medias.

As one of the few artists from DIVIDID, he is very close from its two founders Abis and Signal. Although his style can have similarities with these artists’ sound, like rolling drums, thin hi-hats, techy basslines and a typical use of white noises, he got most of his knowledge through online content. “When you are such good friends as I am with Jonathan and Mark you tend to discuss a lot about music and you tend to share a lot of your favourite tracks. We found out that on a lot of topics especially music, we share the same opinion. But contrary to a popular belief they didn’t help me a lot with getting better at music apart from pointing out a few details”, as he explains.

“I think that the loudness war was for me personally the reason why I became so interested in the genre.”

One of the first thing that comes to our mind when we listen to one of his track is how loud and punchy it sounds. So we talked about loudness and all the competition around it: “I think that the loudness war was for me, personally, the reason why I became so interested in the genre. It happened slowly, but I was really hooked when I heard tracks by Noisia and Mefjus for the first time and thought “Fuck this is mental! Why does this sound so good?” He saw that as a challenge that motivated him to become a very skilled producer.

For him, this is all a matter of balance that implies a lot of synergy between the different sound designs in a track. Both sound design and composition need to be at their optimum to sound that loud, still clear. He carefully uses psychoacoustic effects for the sound to appear at a higher volume to the ear than what it really is. Also, one can see that Buunshin’s tracks have almost no dynamic range, some quite extreme sidechaining between the kick/snare couple and the other elements and finally that all the phases are well aligned together.

“When you have those ideas you can just roll out tracks in a day or two, especially if your environment has been set so I can realise the idea as quickly as possible.“

But after the man had acquired all this technical knowledge and practiced a lot, he wanted to focus on musicality. “I realised every time I came a bit closer to my idea of a good mix, I found that it influenced my decision making so much that I wasn’t thinking about musicality anymore. I think that this is the biggest pitfall for a lot of starting producers like me. The whole drum’n’bass scene including myself talks so much about mixdowns and sexy snares that we tend to forget the importance of composition. […] It exposes to the risk of taking the same creative options every time and to make all your tracks sound the same. This is why I don’t want to think about good mixdowns anymore and would rather focus on musicality and finding a cool vibe”, he says.

Buunshin is very methodical and it totally makes sense with his approach. Now that he learned so much about production, he is able to create tracks by having a precise idea and planification about them. He can execute these ideas really fast without losing the flow of the new project. He explains: “When you have those ideas you can just roll out tracks in a day or two, especially if your environment has been set so I can realise the idea as quickly as possible. At the moment I felt like this was the case in my track “Thoughts” and it has been the best-recieved music of everything I released so far.” He also gets influenced by many other types of music, especially outside of the drum’n’bass spectrum. He has listed funk, house, techno, trance, ambient, garage, breakbeat, disco, metal, indie, experimental and classical music as the current genres he is listening to.

Recently, he has been working on quite a few things, including a remix for the track “The Wall” by Signal, Abis and Tasha Baxter. He is also cooking a new solo EP, which could be out very soon and has footwork and future beats project on the way. Moreover, he said that he had some more collabs incoming with producers like Phace, The Upbeats, Signal, Abis, Unglued, The Caracal Project and Missin. He truly is a hardworking producer!

As a DJ in his very early career, he hasn’t played in a lot of venues and is still very excited to play around the world. Both big events like Let it Roll or Rampage and smaller, more local raves would suit him. “I can’t wait to experience all of it, because that is the exact reason where I have been preparing all this music for!” So, tell your local promoter to book him for the next drum’n’bass party! And actually, he has quite a few original tracks and bootlegs that will never be released, he only plays them during shows. That is one more good reason for him to come to your city!

Finally, we asked him if he had some little production tips to give us and he answered with something quite obvious but which is always relevant to point out: “Yes, I could, but no trick is ever going to make anybody a better producer. Working hard and learning stuff on your own is the best advice I could ever give to somebody. Write down what you learn, try to recognise patterns and reflect on your own work a lot. If stuff then still does not work, just put in more hours.”

Buunshin is also part of Music Squad, “bass music’s largest new-generation collective”, according to UKF. He recently released his remix for the famous “Micro Organism” by Phace and Noisia. Check it out!